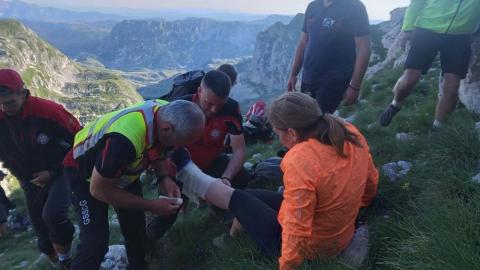 On August 3, the Mountain Service conducted two rescue missions on Mt Durmitor, when they evacuated a family from Poland and two more persons.

Loncovic said that Rescue Service held 13 actions since the beginning of the year, stressing that half of them were during the past two months since the summer tourist season started.

"It would be good if there was some kind of control for those who go to mountains or canyons on their own, but there is no legal basis for such a thing. No one can forbid a tourist to hike on its own nor oblige him to take a guide", Loncovic told BIRN.

On July 16, two US citizens were rescued near the northern town of Gusinje, after they were lost for two days in the mountains of Prokletije. On July 6, a Czech tourist was rescued after she was injured during a hike on Durmitor.

On August 2, a German citizen was rescued in Durmitor, while the same day army helicopters evacuated a woman from France after she was injured during the hike on Durmitor.

"The action was performed without landing, using a side crane. Flight crews and rescuers of the Montenegrin Air Force are the only ones in the country trained for such complex rescues", the Defence Ministry said in a press release.

According to Montenegrin Law on Protection and Rescue, local protection services are in charge of rescuing in emergency situations such as rescue missions from mountains and canyons but also wildfires, earthquakes and floods. They can be supported by Mountain Rescue Service staff and the Interior Ministry or Montenegrin Army officers and helicopters.

While local protection services are financed from the state budget...

Ex-Head of Bulgarian Weapons Company: In 4 months, 4200 tons of Weapons were Exported with the Signature of Ninova