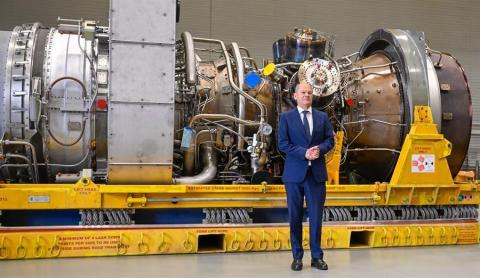 German Chancellor Olaf Scholz yesterday accused Russia of blocking the delivery of a turbine needed to keep gas flowing via the Nord Stream 1 pipeline to Europe.

The unit was "available and working" Scholz said, standing next to the turbine on a visit to the maker Siemens energy.
"There is no reason why this delivery cannot happen," Scholz said.

The turbine had received "all the approvals" it needed for export from Germany to Russia, he said.

Pipeline operators only needed to say that "they want to have the turbine and provide the necessary customs information for transport to Russia," Scholz said.

Transferring the missing unit to Russia was "really easy," he added.

Germany has been working to wean itself off Russian energy imports since the invasion of Ukraine in February.
Amid a scramble by Europe's biggest economy for other energy sources, Scholz said yesterday that it "can make sense" to keep Germany's remaining three nuclear plants running, despite a long-planned stop at the end of the year.

The government has said it will await the outcome of a new "stress test" of the national electric grid before determining whether to stick with the phaseout.

Extending the lifetime of the plants has set off a heated debate in Germany, with the parties in Scholz's coalition divided on the issue.