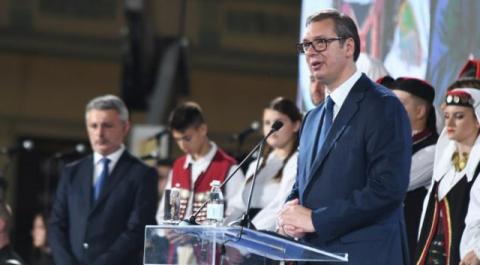 Tonight, Novi Sad was in memory of the victims of the biggest ethnic cleansing after the Second World War, and the sympathy of all who came to support the victims of persecution and pay their respects to those who died and went missing during "the biggest ethnic cleansing on European soil after WWII", the biggest crime against the Serbian people in recent history.
President of Serbia, Aleksandar Vui, attended the commemoration of the anniversary of Operation "Storm".
Vui addressed the crowd and said that for years in Serbia, there seemed to be no witnesses to the crimes committed against our people.
"This is the ninth year that we are commemorating the pogrom, the heinous crime and the biggest ethnic cleansing since the Second World War. There are two reasons why we are here today. The first is sadness, because of the killed children, women, old men, 250.000 exiles. The second is to hear those testimonies. For years, there seemed to be no witnesses and no one in Serbia who could tell how ordinary people, civilians, were killed, how their houses were looted and burned. How, while they were leaving Croatia in tractor convoys, they left their hearths, were stoned... No one to say that they bombed those convoys, killing children and old people, little brothers and sisters. That's how we justified them and repeated the crime, that's how we declared indifference as the ruling ideology," said Vui.
Vui says that we imposed a sense of guilt on our own people due to 18 years of neglecting the memory of Serbian suffering.
"We did that for almost entire adulthood, 18 years, and it didn't get any better than that. We burdened our own people with an eternal sense of guilt, we justified every crime... They even changed our name, called us "Croatian...