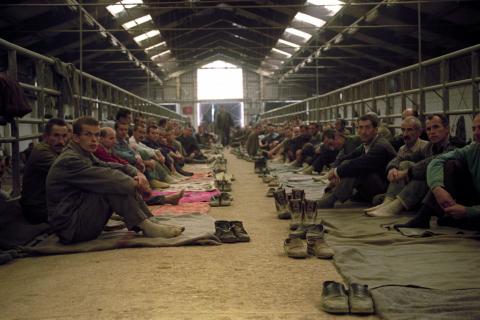 "Detention camps in Bosnia and Herzegovina were intended to inflict collective trauma."

This is how Sarajevo-based genocide scholar Hikmet Karcic explains one of the main arguments in his recently-published book, 'Torture, Humiliate, Kill: Inside the Bosnian Serb Camp System'.

Developed out of his doctoral thesis, it is the first book to give an overview of the detention camps run by Serbs in the Republika Srpska entity during the war, where inmates were subjected to abuse, rape and murder.

"My thesis is that those detention camps were primarily set up in order to filter the local population," Karcic told BIRN in an interview.

"The population that was considered able-bodied and important people who belonged to so-called social elites were killed, while the remaining people were totally traumatised by means of torture, sexual abuse, rape and humiliation to the extent that they could never restore themselves in the areas where they used to live before," he said.

The existence of this collective traumatisation is highlighted by the post-war demographic changes in the municipalities in which the camps operated, he said. The number of Bosniaks living there fell dramatically as many left and have never returned again.

"According to my research and my opinion, the detention camps which were set up and which existed led to very serious traumatisation, not only of the detainees, but there was also trans-generational trauma inflicted on their children and families, leading to a situation in which the homes and neighbourhoods in these little environments in which those people had spent their entire lives up until 1992 now disgusted them," Karcic said.

He said that many former detainees who left Bosnia and Herzegovina never...