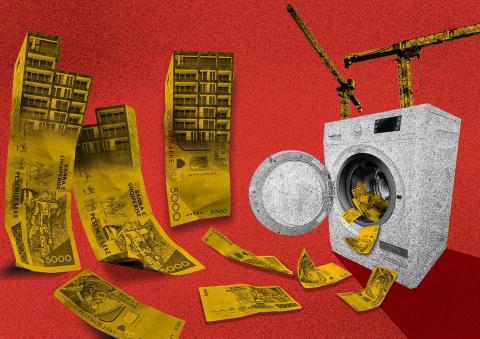 Asked by BIRN whether it saw any issue in the fact prosecutors had not used anti-mafia legislation against Gjini or Shkalla, the Prosecution against Corruption and Organised Crime, SPAK, said it had "no comment on the matter." The law should be applied to both men automatically.

A lawyer for Gjini also refused to comment. Fusha, who now heads a private law firm, said his brother, Shkalla, had left Albania 24 years ago and that he, Fusha, had no knowledge of his activities since. "In any case, the responsibility is personal," Fusha told BIRN.

Gjini's journey from drug smuggling to construction is not unusual in Albania.

"Money laundering through real estate remains a dominant instrument in Albania compared to other forms of laundering of the proceeds of criminal activities," Albania's General Directorate for the Prevention of Money Laundering, DPPP, said in a written response to BIRN.

The scope of such money laundering has evolved over the years, said Arjan Dyrmishi, an expert on security at the Centre for the Study of Democracy and Governance.

"In the early 90s, the money laundering was called 'an investment'," he told BIRN. Today, organised crime figures have "much more money, influence and information".

"They have aimed at the sectors [of the economy] that are more profitable, such as areas that fetch higher prices or developments that are strategically positioned in coastal areas."

In the capital, Tirana, shiny concrete and glass apartment blocks are crowding out low-slung, brick and mortar buildings, while property prices have...