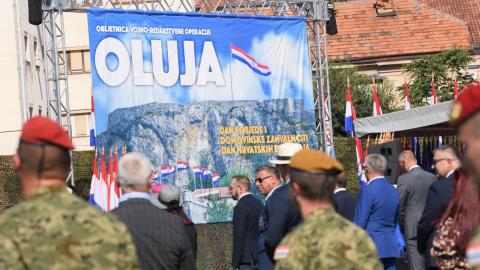 Croatian political leaders, wartime generals and war veterans gathered on Friday in the town of Knin to mark the anniversary of the country's victorious military offensive, Operation Storm, which effectively ended the independence war in the country in 1995.

Croatian President Zoran Milanovic said that the fact that large numbers of Serbs fled Croatia because of the operation was "a human tragedy, but that human tragedy was preceded by human greed and human stupidity of the rulers in Belgrade".

During Operation Storm, Croatian forces regained almost all the territory seized in 1991 by rebel Croatian Serbs. But the operation caused around 200,000 Serbs to leave Croatia in a long convoy of tractors, buses and cars. A total of 677 civilians, mostly Serbs, were killed during and after the operation, according to the Croatian Helsinki Committee.

Mladen Markac, a Croatian wartime general who was acquitted by the Hague Tribunal of being part of a joint criminal enterprise to commit crimes against humanity against Croatian Serbs during Operation Storm, said in a speech at the commemoration that the operation was "in military and human terms, a clean victory".

Croatian Prime Minister Andrej Plenkovic complained in his speech that recently, "attempts are being made to denounce Croatia with false, futile accusations about the expulsion of the Serb population from Croatia in 1995".

"The indictments announced by Belgrade of Croatian pilots [for bombing part a convoy of fleeing Serb refugees in 1995] and the expansion of [Serbia's] jurisdiction to the territory of other countries are unacceptable," Plenkovic said.

However, all the leading politicians dedicated most of their speeches to the current crisis in Bosnia and Herzegovina over...