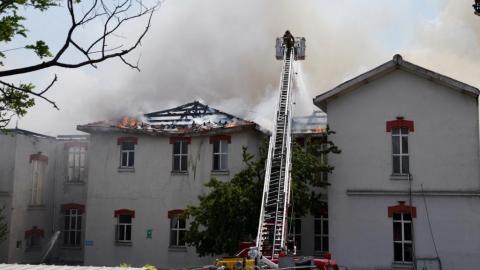 Istanbul city authorities confirmed that there were no deaths and injuries. The fire was under control by late Thursday night.

"Our elderly and patients in the patient care centre were evacuated after the fire broke out in our Balıklı Greek Hospital in Zeytinburnu, Our centuries-old healing centre. Thankfully, we had no casualties or injuries. We are following developments on the ground," Ali Yerlikaya, Istanbul City Governor, said.

The cause of the fire is still unknown but is to be investigated Istanbul Fire Department said.

The Balikli Greek Hospital is one of the oldest and most prestigious hospitals in Istanbul.

Run by the city's now shrunken Greek community, it was established in the late-18th century in Zeytinburnu, just outside Istanbul's ancient city walls.

The head of the global Orthodox Church, Ecumenical Patriarch and Archbishop of Constantinople Bartholomew, said he thanked God no lives were lost.

"We thank Almighty God that there was no loss of life, and we owe a debt of gratitude to the state and municipal authorities, as well as the firefighters, nursing home and hospital workers, and everyone who volunteered to put out the fire and save the nursing home residents," Bartholomew said.

The Greek embassy in Ankara expressed its grief.

"Deeply saddened and moved by the destruction of the nursing home of Balıklı Hospital, one of the historic foundations of the Istanbul Greeks. … Looking forward to seeing it reborn from its...