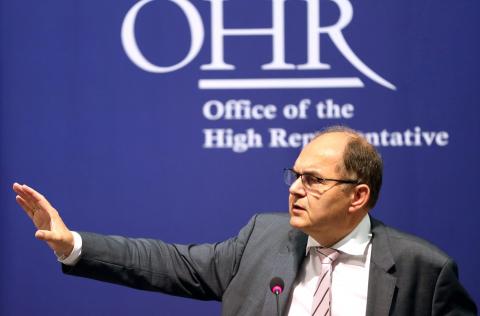 But there is a considerable price to pay for these small steps towards basic functioning in the entity-level government. The larger thrust of Schmidt's proposal amounts to a sort of election gerrymandering by the Office of the High Representative, OHR. Apparently backed by the US and UK, it delivers a victory to the Croat nationalist HDZ party - which, according to diplomatic sources in Sarajevo and Brussels, has threatened violence if the upcoming October election results do not go their way.

Thus, discussions in Sarajevo revolve around the three key questions. First, is the international community's "well-intentioned" attempt to guarantee the establishment of a government after the general elections in October actually completing a plan that Russia has failed to implement in Bosnia over the past decade? Second, does this action of the OHR surrender Bosnia to the Russian sphere of interest and the influence of illiberal regimes, so expanding the Balkan belt of countries outside NATO and the EU? Third, is this intentional, or does it reflect an enduring naïveté about political realities in Bosnia and the wider Western Balkans?

Recent public opinion polling by the International Republican Institute, IRI,  in Bosnia on foreign policy issues, including alignment with NATO and the EU, found that citizens of the country still...