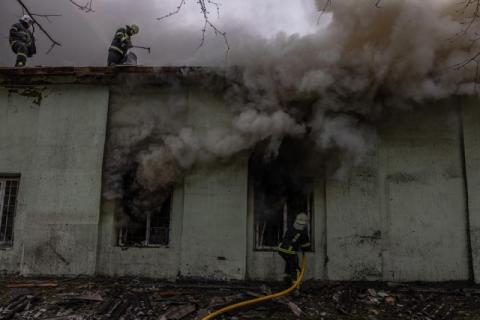 Fighting in Ukraine continues. Ukrainian officials claim that Russian forces shelled Zaporozhye, and that strong explosions were heard in Mykolaiv.
Ukrainian President Volodymyr Zelensky called on China to use its influence on Russia to end the conflict.
Amnesty International claims that Ukrainian forces have threatened civilians. Pro-Russian authorities announce that the Russian army has captured a strategic point near Donetsk.

GB: Russian actions in Zaporozhye threatened the safety of the nuclear plant

The actions of the Russian forces at the Zaporizhzhya nuclear power plant most likely threatened the safety of the normal operation of the nuclear power plant, the British Ministry of Defense announced today, the Guardian reports.
"Russian forces are likely to have used the wider area of the facility, particularly the neighboring town of Energodar, to rest their forces, using the nuclear plant's protected status to reduce the risk to their equipment and personnel from Ukrainian attacks," Britain said in an updated intelligence report on Twitter, as Reuters reports. From London, they add that "Russia's intentions regarding the power plant remain unclear even five months after the occupation of Ukraine."
"Russian forces are likely operating in the regions near the power plant, using artillery to target Ukrainian territory on the west bank of the Dnieper River," the British added.

Russian Foreign Minister Sergei Lavrov said today that Moscow is ready to discuss the exchange of prisoners with Washington through existing diplomatic channels.
"We are ready to discuss that topic, but within the channels agreed upon by Presidents Putin and Biden,...