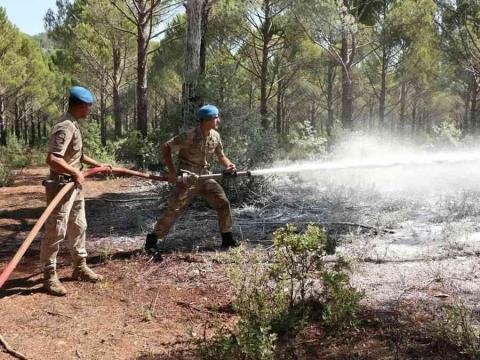 The rehabilitation works of some 90 percent of the 139,500 hectares of land damaged in forest fires last year have been completed, the head of the General Directorate of Forestry has said.

Noting that the rehabilitation works will be completed by the end of the year, Bekir Karacabey said, "The methods to rehabilitate these lands were determined under the guidance of technical teams."

"The planning efforts regarding the rehabilitation and afforestation have been completed in 90 percent of these lands," Karacabey told daily Milliyet, adding that these areas will regain their flora in three to five years.

Karacabey also pointed out that there has been no construction or allocation for any different purpose in the burned areas.

"According to the relevant article of the constitution, when a forest fire occurs, afforestation works begin immediately in that area, where even other kinds of agriculture and animal husbandry are not allowed," Karacabey said.

There have been 24,739 forest fires in Türkiye in the last 10 years, and a total area of 214,852 hectares was damaged in these fires, Karacabey added.

Most forest fires are caused by humans as 28.4 percent of the fires in the last 10 years were caused by negligence and carelessness, 5.8 percent by accident and 2.1 percent by intention. While 9.2 percent broke out of natural causes such as lightning strikes, the cause of 54.5 percent is unknown.