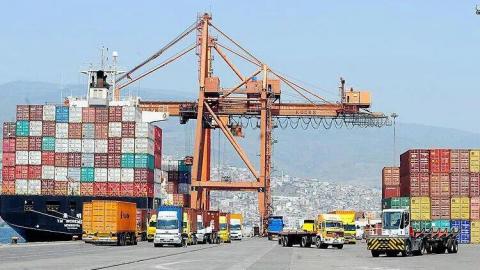 Türkiye increased its exports by 13.4 percent on an annual basis to $18.6 billion in July, preliminary data from the Trade Ministry showed on Aug. 3.

The depreciation of the euro against the U.S. dollar poses a risk to the trade balance, said Trade Minister Mehmet Muş.

"If the euro/dollar parity had not changed, our exports, in terms of euro, could have been $7 billion higher in July," he said.

The export to import coverage ratio deteriorated from 79.1 percent in July 2021 to 63.7 percent last month, excluding energy imports, the coverage ratio was 78.9 percent, the data showed.

Last month, the energy import bill soared 95.6 percent from a year ago to $7.7 billion, and in the first seven months of the year the country's energy imports grew 145 percent to $22.7 billion.

Exports to Germany were up 3 percent in July to $1.49 billion and exports to the U.S. rocketed nearly 25 percent to $1.3 billion. The U.K. increased its imports from Türkiye by 3.6 percent to $1 billion.

Exports to the EU exhibited a 5.2 percent increase in July to $7.4 billion.

The share of the manufacturing sector in the country's total exports was 94.2 percent or $17.5 billion, while the agriculture sector accounted for 2.9 percent or $530 million.