Yet another fish die-off, this time near Lake Bled 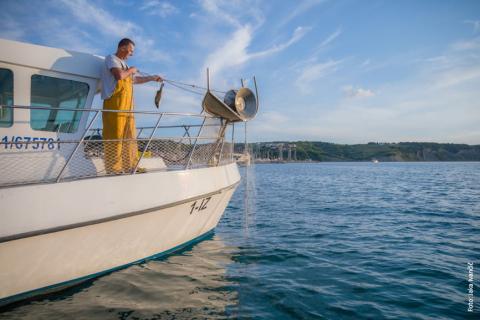 Bled/Radovljica – The peak of the tourist season at Lake Bled resulted in large quantities of malodorous waste being washed off into the only outlet from the lake, the local environmental organisation has warned, adding that the Sava Bohinjka river is also full of algae. This resulted in the nearby fish farm having to euthanise thousands of fish due to poisoning.

The Environmental Protection Organisation Bled said in a press release on Thursday that huge amounts of sewage flowed from the local wastewater treatment plant into the Jezernica creek, the only outlet from Lake Bled.

“The creek is very much like a sewer tunnel, the water being brown and muddy, and tree branches at the banks are drooping due to the weight of sanitary sewer water,” it added.

There is a spillway mounted on the tunnel leading into the Jezernica, however it can only catch large pieces of waste and if water levels are high waste material spills back into the creek.

This affects the Sava Bohinjka, which the Jezernica flows into, and where a large algae population has developed. This led to all 25,000 fish kept by the Radovljica Angling Club at the confluence with the Sava dying two weeks ago due to poisoning.

This is yet another fish die-off in Slovenia, after around a tonne and a half of fish died in Mali Graben, and 50 kilos in Homška Mlinščica in July. Two fish die-offs also occurred in June, one in Nanošica and the other in Vrtojbica in the west.

The Kranj police investigators have also inspected the area and took samples for analysis.

Waste being spilled into the waters is a direct consequence of the Bled sewer system being overloaded, say the locals, while the municipality maintains the wastewater treatment plant is functioning as it should.

Anže Bizjak, CEO of the local utility company that operates the Bled sewer system, said last year that the smelly foam collecting at the Lancovo dam was a result of low water levels and diminished water flow. That is why river algae have started to grow.

He also added that faecal matter coming out of the treatment plant is diluted to the extent that it does not exceed parameters set in the plant’s environmental permit.

Recently, many of those visiting Bled have reported gastrointestinal issues, likely caused by polluted water, noted the Environmental Conservation Organisation. They have notified the National Institute for Public Health about the outburst.

The post Yet another fish die-off, this time near Lake Bled appeared first on Slovenia Times.