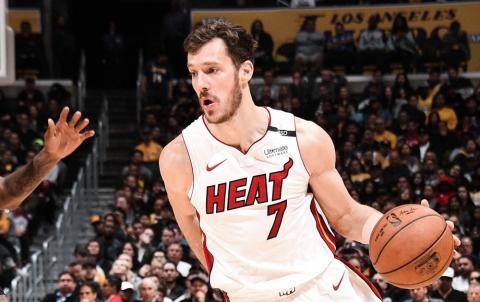 Ljubljana – Slovenian basketball star Goran Dragić has decided to rejoin the Slovenian men’s team to defend the 2017 title at this year’s EuroBasket in what is a change of heart after bidding his teammates farewell. As team captain Dragić played a major role in Slovenia’s becoming the European basketball champion five years ago.

After Slovenia won the 2017 EuroBasket, Dragić announced he would retire from the national team. He played his farewell match with the team in June this year when Slovenia put on a big show and defeated Croatia in a World Cup qualifier.

Prior to his decision to return to the team for the coming EuroBasket, there were speculations about the comeback, as he had left the door ajar to this possibility when talking about his plans for the future.

This came true today when Dragić, who recently signed a deal with NBA’s Chicago Bulls, tweeted “I’m back” along with the hashtag EuroBasket and a photo of himself holding the 2017 cup.

Slovenian basketball fans now have much to rejoice about as does the country’s Basketball Association (KZS), which responded to his decision by tweeting “Happy day today”.

Dragić is the best scorer in the history of the Slovenian team having scored 1,581 points since 2006 when he first played for the national team.

Co-hosted by four countries, the 2022 EuroBasket starts on 1 September, and Slovenia is among the favourites to win.