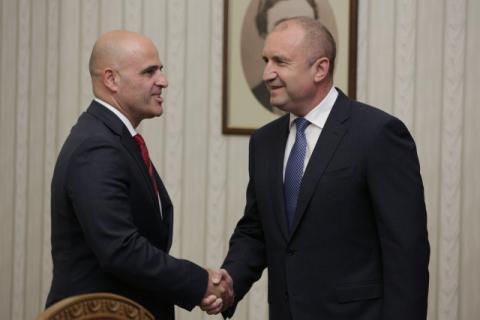 "Bulgaria will once again stand in solidarity with fraternal Macedonia". This was stated by President of Bulgaria Rumen Radev during his meeting with the Prime Minister of the Republic of Macedonia Dimitar Kovachevski.

The head of state emphasized that our relations with the RNM have stood on a solid foundation.

"The relations between our two brotherly countries rest on a solid foundation that is beyond any political conjuncture. This is the foundation that is the basis of Bulgaria's decisions to unreservedly support Macedonia since the recognition of the country's statehood and independence, through the insistence on the preventive contingent of the UN in the event of the disintegration of the former Yugoslavia, through the provision of assistance during the embargo, through the provision of military-technical assistance, in case of catastrophes and natural disasters. For the sake of the population on both sides of the border, for the sake of future generations and for the sake of our common European future, we are obliged to develop and strengthen this foundation," President Radev said.

He assured the Macedonian guests that Bulgaria will once again stand in solidarity with fraternal Macedonia.

The President hopes that Dimitar Kovachevski's meeting today with the Bulgarian government is a step towards achieving mutually beneficial solutions. He welcomed his visit to Sofia. "There should be much more frequent meetings and dialogue at the highest government level to strengthen trust and understanding," Radev said.

Dimitar Kovachevski stated that he had a positive meeting with Prime Minister Galab Donev, which lasted longer than expected. At it, the possibilities of RNM receiving...