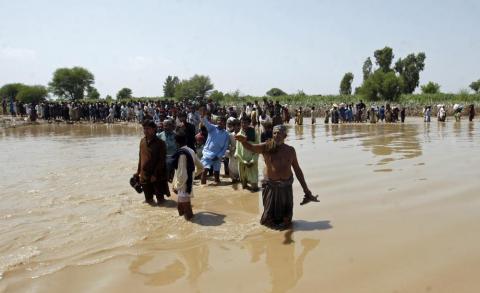 U.N. Secretary-General Antonio Guterres appealed to the world to help Pakistan after arriving in the country Friday to see damage from the record floods that have killed hundreds and left more than half a million people homeless and living in tents under the open sky.

His trip comes less than two weeks after Guterres appealed for $160 million in emergency funding to help those affected by the monsoon rains and floods that have caused at least $10 billion in damages and 1,391 deaths.

"I have arrived in Pakistan to express my deep solidarity with the Pakistani people after the devastating floods here. I appeal for massive support from the international community as Pakistan responds to this climate catastrophe," he said on Twitter before dawn.

Last week, the U.N. chief issued a stern warning about the effects of climate change.

"Let's stop sleepwalking toward the destruction of our planet by climate change," he said in a video message to a ceremony in Islamabad at the time. "Today, it's Pakistan. Tomorrow, it could be your country."

So far, U.N. agencies and several countries have sent dozens of planeloads of aid. The United States said it will provide $30 million in assistance to help flood victims.

The floods have touched all of Pakistan and affected more than 3.3 million people. Heritages sites have also been damaged, including Mohenjo Daro, considered one of the best-preserved ancient urban settlements in South Asia.

The ruins near the Indus River were discovered in 1922 and to this day, mystery surrounds the disappearance of the civilization that dates back 4,500 years, coinciding with those of ancient Egypt and Mesopotamia.

Mohenjo Daro is a UNESCO World Heritage Site, and the U.N. heritage agency on...