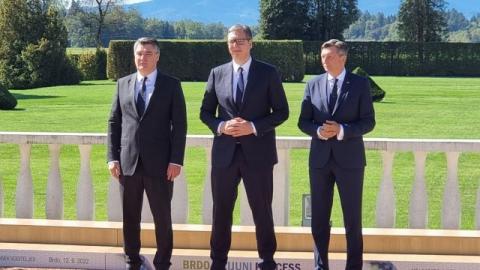 President of Serbia, Aleksandar Vui, is participating in the summit.
Croatian President Zoran Milanovi and Slovenian President Borut Pahor welcome the guests.
Vjosa Osmani also arrived. The members of the BiH Presidency efik Daferovi, Milorad Dodik and eljko Komi are also present. Immediately after them came the President of Montenegro Milo Djukanovi.
The Brdo-Brioni Process initiative was launched in 2010 when the then Slovenian and Croatian Prime Minister Borut Pahor and Jadranka Kosor, after signing an arbitration agreement between the two countries, wanted to set an example for the leaders of the Western Balkans and encourage them to resolve bilateral issues and increase the pace of the European integration process.
Since 2013, the meetings within the Brdo-Brioni Process have been held every year, and the gathering of regional leaders was joined by special guests, including the former German Chancellor Angela Merkel, former President of Austria Heinz Fischer, President of Germany Frank-Walter Steinmeier, President of Poland Andrzej Duda, his Italian colleague Sergio Mattarella, the current president of the USA, then vice president Joseph Biden, along with the representatives of European institutions.
On September 3, Pahor was in Belgrade, where he discussed the Summit with the President of Serbia and "all important issues for the success of that conference for the two goals that were in the agenda for the previous 11 years, namely the European perspective of the Western Balkans and other peace, stability and development of the region".
The President of Slovenia then said that he believes that there is a possibility that all the leaders in the region will agree and that Serbia, Montenegro, and North Macedonia will open their...