Vučić: No tensions, there are big differences; I am grateful to Milanović VIDEO/PHOTO 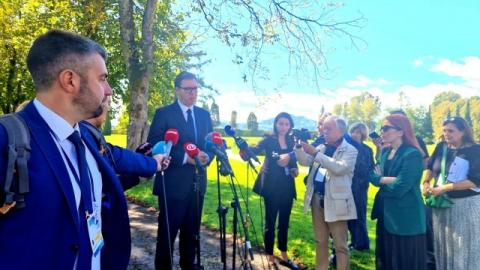 When asked if there were tensions, Vui said that there were not.
"There were no tensions, differences are not tensions. The talks went normally, there were no tensions. Our position on the issue of Kosovo is different from the position of other countries, with the exception of the Serbian representatives in Bosnia and Herzegovina," said Vui.
"We also talked about 6 points with the emphasis that the EU should help the Western Balkans if it can in the difficult energy situation we are all in," said the president, adding that he is at the head of a country that is on the European path, but in which there has never been more opposition to joining the EU, which normally has its mouth full of international law when it comes to Ukraine, but not Serbia and the situation with Kosovo.
"The basic point is the reaffirmation of the accelerated European path of the entire region. Meaning, the visa liberalization of the entire region and the granting of candidate status to Bosnia-Herzegovina. We had many differences, opposing views," Vui said.
"Everyone can lay a flower in Jasenovac, but not me. They forbade me to lay an ordinary flower. But I am grateful to President Milanovi because today he supported Serbia's European path," said Vui.
"If you had a referendum in Serbia for the EU today, our people would say no. There is a different approach in Europe when talking about the territorial integrity of Ukraine and the integrity of Serbia," he said. "Secularism is at a high level in our country. I don't know how it is in your country in Croatia, but in our country the church is separated from the state. They can make decisions, but the state is not involved. I know that you can't wait for me to come to Jasenovac that you can ask me whatever you want,"...