Dačić: "We will vote" 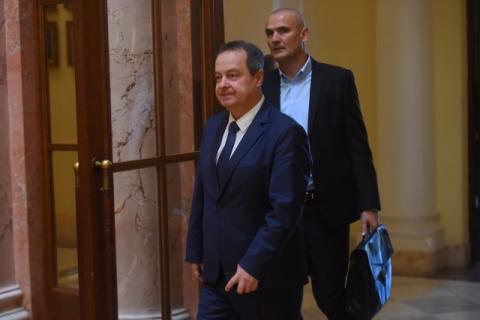 Member of the Parliament of the Socialist Party of Serbia, Ivica Dai said today that this parliamentary group will vote for the Report on the negotiation process with the temporary institutions of self-government in Pristina, because everyone must be aware of the situation in which Serbia is.
Dacic emphasized at the press conference that one should not talk about the possibility of honorable defeats, but to implement a policy with results.
"The policy led by (Serbian President) Aleksandar Vui will not depart from the position of the National Assembly from 2013, which is that Serbia will neither formally nor informally recognize Kosovo," Dai said. He emphasized that the continuation of the dialogue is necessary, because there is no other solution.
"The only problem has always been separatism and the creation of a great Albania. We must continue to seek compromises and try to avoid conflicts," said Dai.

Who in Europe told the German chancellor what I said? Foto: Tanjug/Strahinja Aimovi/bs

"Who in Europe once said to the German chancellor what I said? Who is the one who said that? I respect him a lot, but when it comes to the issue of Kosovo and Metohija, I stood firm and defended Serbia's interests," said Vui.