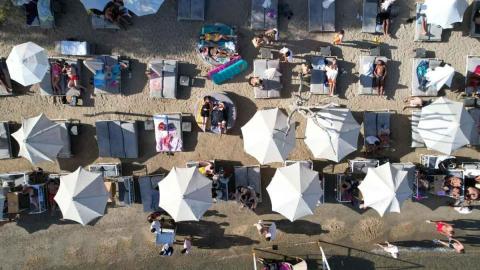 Recording a 2 percent increase in flight arrivals compared to the pre-pandemic period, Istanbul has been the best performing city in Europe this summer, according to the data of travel data analysis company ForwardKeys.

Türkiye and Greece, the two largest air travel destinations, have both exceeded pre-pandemic levels for international visitor arrivals by 9 percent and 2 percent respectively.

Air travel to Albania, a relatively small destination with less than 1 percent market share of European flight arrivals, was also up by 28 percent.

While no other major country destinations recovered to the numbers seen in the pre-pandemic period (2019), Slovenia, just 7 percent down, Iceland, 8 percent down, and Portugal at 10 percent down came close.

Major factors driving the strong performance of Türkiye include an ongoing decline in the value of the Turkish Lira and its openness to the Russian market, from where direct flights to most of Europe have been banned, according to the company.

In the summer of 2019 Russians accounted for 4 percent of all arrivals to Europe, whereas in 2022, this dropped dramatically.

Greece has performed strongly as a destination throughout the pandemic by implementing relatively visitor-friendly COVID-19 travel restrictions, ForwardKeys said.

European destinations could have attracted more visitors during the summer months if the aviation industry had been better able to cope with the surge in demand for travel during late spring and early summer, said the company, adding that if there had been no disruption, the recovery in intra-European flight bookings would have been five...

Bulgaria filled its "Chiren" Gas Storage Facility up to 80%

Editorial: An error of history