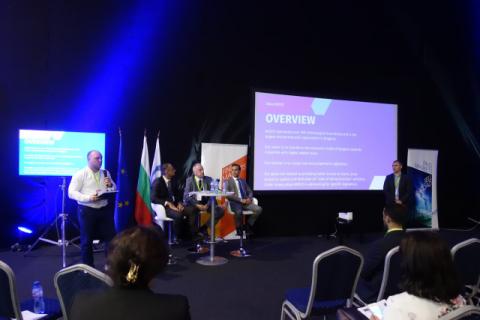 Leading Bulgarian industries presented their activity, export opportunities and partnership to representatives of the diplomatic corps in Bulgaria from over 30 embassies within the framework of the "Meet the Bulgarian Industry" conference organized by BSMEPA.

The purpose of the presentation, which took place within the framework of the multidisciplinary event "Tuk-Tam Kosher", is to familiarize the representatives of the countries with embassies in the country with the most important details and figures regarding the sectors of the Bulgarian economy and to facilitate the access of companies to the commercial representations of the embassies.

The "Meet the Bulgarian Industry" conference was specially opened by the Deputy Minister of Innovation and Growth Stefan Savov and the Executive Director of BSMEPA Boyko Takov under the moderation of Lachezar Petkov, Director, Directorate "Internationalization" of the Agency.