Vučić: They won't bomb us 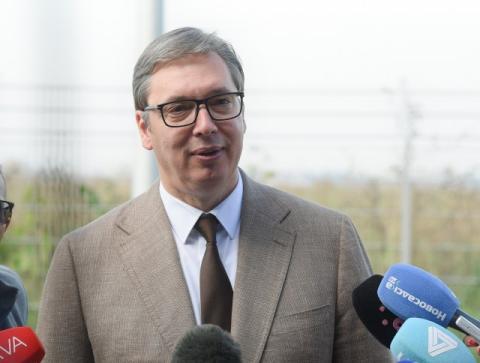 Vui, at the ceremonial opening of the German MTU factory in Nova Pazova, counted almost every one of the Prague interlocutors, thus responding to the writings of the Croatian press and comments that at one point he was left alone at the summit, while world officials were talking in a group.
"In Prague, I met with 38 world leaders, I was with Erdogan three times, I had the honor of speaking at the dinner, but I didn't get to talk to Plenkovi," said Vui.
Asked to comment on the writings of the Croatian press about the "orgy in Jasenovac", the President of Serbia says that he has nothing to say, especially since children were killed there.
Let us remind you that since yesterday the relations between Serbia and Croatia have been even more strained due to the decision to cancel diversification, which left Serbia without Russian oil.
"There were many of them who spoke about sanctions, but no one did that in a commanding tone. Everyone is publicly asking us to impose sanctions on Russia, I understand and accept it as a politically legal and legitimate request. Regardless of the fact whether we will introduce the sanctions or not, we are part of the European political community.
As you saw, we didn't introduce them, so we were a part and a very important part because our panel included the chancellor of Germany and the prime minister of Italy and the president of Switzerland and the prime minister of Norway, right where I was, even though we didn't choose the one that was the most talked about and it brings the least solutions, which is peace and security, we were already at the energy forum," said Vui.
He also said that Serbia knew about the decision to suspend Russian oil before, that is, that those sanctions for Russia will apply to...