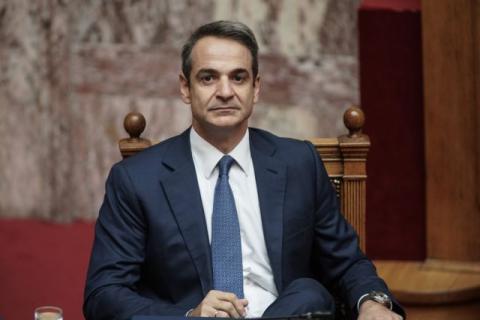 Prime Minister Kyriakos Mitsotakis, who is visiting Pella and Edessa on Tuesday, was given a tour of the Pella Museum and its archaeological site by Culture Minister Lina Mendoni and the head of the local antiquities office, Elizabeth Tsigarida. While touring the ancient royal palace of the Macedonian dynasty of Philip and Alexander the Great, he admired the antiquities, mosaics and relics and inspected the works designed to showcase the palace and renew infrastructure for visitors.

At the site of the ancient palace of Pella, projects and actions budgeted at 2.5 million euros have been launched, which significantly upgrade the facilities, adding routes for the disabled, a new ticket house and entrance and new toilets.

The prime minister expressed his satisfaction with the progress of the works at the royal palace of ancient Pella and underlined that the government will continue to strengthen efforts to restore it, so that a "full image of the greatness of Macedonian culture" can emerge. He noted that Macedonia, with the works being done, combined with its history, is becoming "unique" as a tourist destination.

Mitsotakis underlined that "within the next six to nine months" the rest of the Thessaloniki-Edessa road will also be contracted, recalling that it was among his initial announcements and commitments.

"There were a lot of problems, but things are now underway, the two main projects for the area are the road and the dam," said the prime minister.