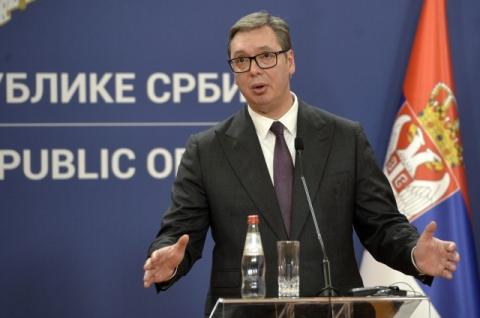 The purpose of the meeting is to present the Annual Report of the European Commission on Serbia 2022.
"I just had the pleasure of presenting the 2022 report on Serbia's progress to President Vui. This report is a comprehensive document based on facts. You know that Ukraine, Georgia and Moldova have applied for candidate status for membership in the European Union. The European Commission has passed the decision to grant candidate status to Bosnia-Herzegovina as well," Gioffre spoke first.
He later referred to the content of the report.
"The report refers to political criteria, what we call the basics, and we reported on the elections that were held on April 3. It also highlights areas such as the judiciary where progress has been noted. Progress has also been achieved in the fight against corruption. It was concluded that the amendments identified shortcomings that need to be overcome," he explained.
"It is important that the EC states that we are ready to open Cluster 3. This report opens up a lot of space for us to continue working with everyone from Brussels with comprehensive reforms, to do a lot in the rule of law. It is also very important to analyze that Serbia is building good neighborly relations with everyone, except that it was stated that Serbia has bad relations with Croatia. Another issue is the issue of Montenegro, where our progress is noted. Chapter 35, i.e. dialogue, is also important. Serbia did not cause any crisis, and in that regard, the road ahead is difficult for us and I am afraid that there will be no good news for Serbia," said Vui.

Giaufret also mentioned the dialogue with the so-called Kosovo.
"The dialogue continued, the negotiators met regularly, and a meeting between Vui and Kurti was held, but...

Vučić met with the President of the Parliament of Montenegro
Majority in Montenegro Back Ukraine, says Ambassador