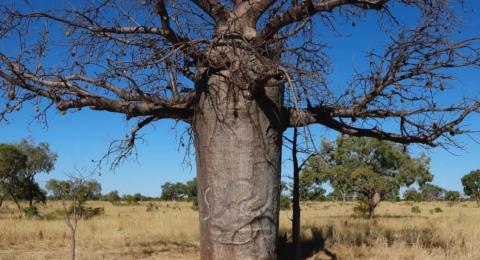 Professor Sue O'Connor, from the Australian National University, said the long, looping carvings linked to Aboriginal creation stories were of huge cultural significance, with some dating back at least several hundreds of years.

"Sadly, after lasting centuries if not millennia, this incredible artwork, which is equally as significant as the rock art Indigenous Australians are famous for, is now in danger of being lost," she said.

It took researchers two years to find carvings on 12 trees in the Tanami desert, a remote stretch of land on the border between the state of Western Australia and the Northern Territory.

O'Connor said researchers were racing to investigate hundreds of other baobab trees, and to photograph any carvings before they died.

"Unlike most Australian trees, the inner wood of boabs is soft and fibrous and when the tree dies, they just collapse," she said.

Brenda Garstone, an Aboriginal woman from Western Australia who was involved in the research, said she wanted to preserve the carvings for future generations.

"We are in a race against time to document this invaluable cultural heritage," she said.

O'Connor said the next step was getting an accurate age for the baobab trees.

"They are often said to live for up to 2,000 years but this is based on the ages obtained from some of the massive baobab trees in South Africa, which are a different species.

"We simply don't know how old the Australian boabs are."

Worldwide, there are eight species of the baobab tree -- six from...

Battle rages in Ukraine town; Russia shakes up its military