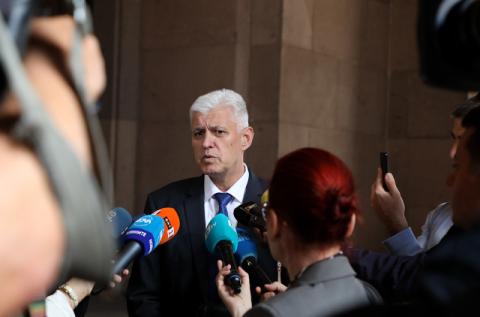 "I have always said that Russia is currently a risk to our national security. There is no other opinion on the matter. But for now, there is no direct threat that involes Bulgaria, as well as NATO, in a military conflict."

This was stated today by the acting Minister of Defense Dimitar Stoyanov to Bulgarian journalists in Brussels.

He spoke after the end of the two-day meeting of the defense ministers of the NATO countries.

"Any threat against Bulgaria will immediately trigger Article 5 of the Washington Treaty. It means dragging NATO into war. I doubt any country would like that, including Russia," the minister believes.

The first issue was the strategic concept of the deterrence and defense pact. Bulgaria has begun the process of implementing the strategy with the multinational battle group in mind. Italy was designated as the framework country, and Bulgaria as the host country. On October 17, the transfer of command to Italy will take place.

According to the strategic concept, this group can eventually grow to a brigade. This is how Stoyanov answered a question from Club Z in connection with the statement of US Ambassador to NATO Julianne Smith two days ago that additional deployment of military forces on the eastern flank of the alliance will be discussed. "But at the moment we are at the battalion level", added the minister.

Bulgaria has confirmed its participation in the KFOR missions in Kosovo and "Althea" in Bosnia and Herzegovina, as well as in the mission in Iraq. Our country pays special attention to "Althea", since we have nearly 100 military personnel in Bosnia. In order for this mission to continue, there must be a UN...

Djedovic: Gas interconnector with Bulgaria must be finished by autumn