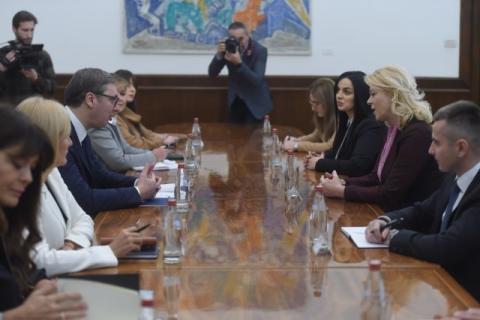 Vui and Djurovi met in the building of the Presidency of Serbia.
"I discussed the most important regional issues with President @skupstinacrnegore and we agreed to continue to strengthen friendly ties," it is stated in the description of the photo posted on the "Buducnostsrbijeav" Instagram account.

Vui and Djurovi discussed bilateral relations, European integration, geopolitical issues, the situation in the region and other key topics of importance for the citizens of the two countries.
Vui expressed satisfaction with the greater degree of cooperation between the parliaments of Serbia and Montenegro and pointed out that it is necessary to work on additional strengthening of economic cooperation and infrastructure connection, Office for Media Relations of the President of the Republic announced.
Vui emphasized that Serbia will continue to promote stability in the region, leading a policy of peace and cooperation in the Western Balkans, as well as that it remains committed to the further development of good neighborly relations with Montenegro.
He expressed the expectation that the two countries will continue to resolve all open issues through dialogue in a mutually acceptable manner, because good relations between Serbia and Montenegro are important not only for the citizens of the two countries, but also for overall stability in the region.
President of the Montenegrin Parliament will also speak in Belgrade today with the President of the Serbian Parliament Vladimir Orli and Prime Minister Ana Brnabi.

Address of Vučić and Giaufret after the meeting
Majority in Montenegro Back Ukraine, says Ambassador