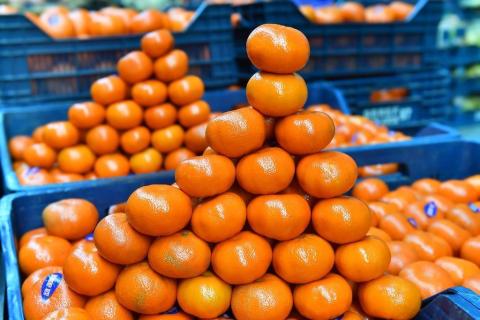 Türkiye's fresh fruit and vegetable exports amounted to $1.94 billion in the first nine months of this year, with 34 percent of those exports going to Russia.

The country delivered 3.35 million tons of fruit and vegetables to foreign markets this year, according to Ferhat Gürüz, the head of the Mediterranean Fresh Fruit and Vegetable Exporters' Association (AKİB).

Exports from the Mediterranean region reached $852.4 million in January-September, accounting for 44 percent of all exports.

Tomato exports grew 7 percent to $284 million, while peach exports increased by 20 percent to $198 million. Foreign countries bought $169 million worth of tangerine from Türkiye over the same period, marking a 15 percent increase from a year ago.

Russia was the largest market for Turkish growers, Gürüz said.

The exports to Russia amounted to $656 million in the first nine months of the year, followed by Germany at $195.5 million and Romania at $143.1 million, Gürüz added.

The exports to Israel, Croatia and Belarus also increased significantly, Gürüz said, noting that Saudi Arabia imported around $15 million worth of fruits and vegetables from Türkiye in September.

"The sales to Saudi Arabia, which gained momentum in August, continued at a faster pace last month. This is a welcoming development," Gürüz said, recalling that annual fruit and vegetable exports to this country were around $90 million four years ago.

Meanwhile, Türkiye, one of the leading tobacco producers in the world, exported $4.2 billion worth of tobacco between January 2018 and September 2020.

In the whole of last year, the exports amounted to $783 million, while...

B92.net learns: Reports of bombs threats in Belgrade
Poland set to build wall along border with Russia to keep out migrants

Day 241 of the Invasion of Ukraine: Air alert across the Country, Russian Strikes in a many Areas

Kostadin Kostadinov: This Parliament is a majority of an indiscriminate Euro-Atlantic crowd

"I would warn the Serbs, this is not their 'Mother Russia'"

"Unfortunately, it has come true. Belarus is on target"