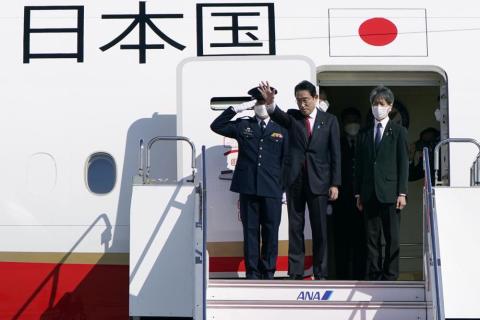 Japanese Prime Minister Fumio Kishida, who is traveling to Australia for talks with his counterpart Anthony Albanese, said Friday he wants to bolster military and energy cooperation between the two countries amid their shared concerns about China.

Kishida said he hoped to update their 2007 bilateral security pact to factor in the progress they've made and further promote their partnership.

Australia's liquefied natural gas and coal exports are key to a stable energy supply for resource-scarce Japan, and Kishida said he hoped to discuss the future of Japanese resources and energy stability with Albanese.

"Australia is our special strategic partner," Kishida added, noting that Australia is a key member of the Quad dialogue that also includes the U.S. and India, and was established to discuss regional security and economic issues as a counter to China's growing influence.

Japan and Australia, both U.S. allies, share a largely similar vision for regional security and Japan hopes to elevate its cooperation with Australia. The leaders are planning to issue a possible new declaration on security cooperation that would reinforce the 2007 pact looking ahead to the next decade, a Japanese Foreign Ministry official said on condition of anonymity, citing protocol.

The pact committed the countries to regional and global peace and stability as well as cooperation on counterterrorism and rebuilding Iraq after the 2003 war.

Kishida and Albanese will also consider...