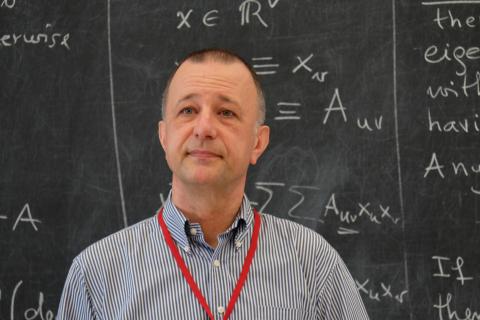 Professor Bojan Mohar from the Ljubljana Faculty of Mathematics has become the first Slovenian researcher to win the prestigious ERC Synergy Grant. He will be part of an international team researching the dynamics of karst watercourses and the occurrence of phenomena in extreme situations such as floods and droughts.

The European Research Council granted EUR 9.9 million to Mohar’s KARST project, which will also include physicist Benoit Noetinger from IFPEN in France, hydrogeologist Philippe Renard from the University of Neuchatel in Switzerland, and hydrologist Marco Dentz from IDAEA-CSIC in Spain.

Mohar, who is presently living in Canada and is active at the Simon Fraser University, has described karst watercourses as “a great treasure and a great danger at the same time”.

“While they are a source of drinking water for around 25% of the world’s population, they are also capable of very rapid water flow and pollution transport,” explained Mohar, whose main areas of expertise are graph theory and theoretical computer science.

The project aims to explain the physical laws that govern water flows and the transport of pollution through karst watercourses, with the end goal being the ability to predict when extreme conditions might occur in the karst world and how they might affect the karst subsurface, which is particularly important in the light of climate change.

Mohar added that the project was a confirmation that they were on the right track. “I hope it will also be an incentive for other researchers and sciences to internationalise, to join forces and to bring cutting-edge knowledge to Slovenia.”

KARST is already the third ERC project secured by the Ljubljana Faculty of Mathematics, with astrophysicist Maruša Bradač and mathematician Franc Forstnerič getting nearly EUR 2.1 million and EUR 1.5 million respectively as part of the European Research Council 2021 Advanced Grants competition in April this year.

Mohar is active at the Ljubljana Institute of Mathematics, Physics and Mechanics and the Simon Fraser University, one of Canada’s most prestigious universities in terms of research achievements.

He is a member of the Slovenian Academy of Engineering and the Royal Society of Canada. His achievements in algebraic graph theory are well-known for their applications in computer science and can also be linked to the operations of the Google search engine.