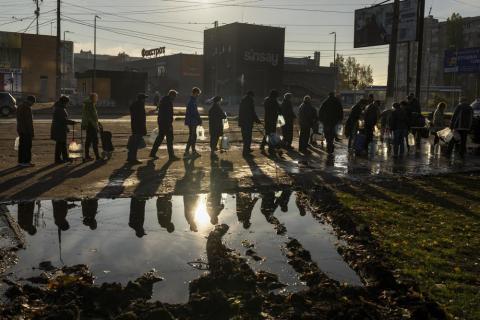 Ukrainian authorities tried to dampen public fears over Russia's use of Iranian drones by claiming increasing success Monday in shooting them down, while the Kremlin's talk of a possible "dirty bomb" attack added another worrying dimension as the war enters its ninth month.

Ukrainians are bracing for less electric power this winter following a sustained Russian barrage on their infrastructure in recent weeks. Citizens in the southern Ukrainian city of Mykolaiv lined up for water and essential supplies Monday as Ukrainian forces advanced on the nearby Russian-occupied city of Kherson.

Ukraine's forces have shot down more than two-thirds of the approximately 330 Shahed drones that Russia has fired through Saturday, the head of Ukraine's intelligence service, Kyrylo Budanov, said Monday. Budanov said Russia's military had ordered about 1,700 drones of different types and is rolling out a second batch of about 300 Shaheds.

"Terror with the use of 'Shaheds' can actually last for a long time," he was quoted as saying in the Ukrainska Pravda newspaper, adding: "Air defense is basically coping, 70% are shot down."

Both Russia and Iran deny that Iranian-built drones have been used but the triangle-shaped Shahed-136s have rained down on civilians in Kiev and elsewhere.

"First of all, we have to be able to counter the drones," U.S. House of Representatives Speaker Nancy Pelosi said Monday at a press conference in Zagreb with Croatia's leader. "It is a dangerous technology and it must be stopped."

Britain's Ministry of Defense said Russia was likely to use a large number of drones to try to penetrate the "increasingly effective Ukrainian air defenses", to substitute for Russian-made long-range precision weapons "which are becoming...