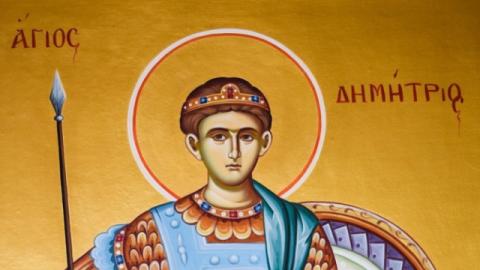 The folk proverb says: "Saint Demetrius brings the winter, and Saint George brings the summer". According to belief, the first snowflakes fall from the saint's white beard. "When Dimitrov Day comes, so does the snow" - say the Bulgarians.

Saint Demetrius is an Orthodox saint. In the folk calendar, the holiday Dimitrovden marks the turning point in the season and the beginning of winter. According to the belief, at midnight on the eve of the holiday, the sky opens, after which the first snow is expected. The saint is considered the patron of winter, cold and snow.

Saint Demetrius was born in the 3rd century in the city of Thessaloniki, and his father was the then mayor. After his death, Emperor Maximinus Hercules assigned this post to Demetrius, who was received with great joy and respect by the townspeople. As governor of Thessaloniki, Demetrius openly professed and glorified the Christian faith. Dissatisfied with his behavior, the emperor Galerius threw him into a dungeon, and later, on October 26, 306, ordered him killed. Then the Christian church proclaimed him a martyr of the faith and a saint, and the inhabitants of Thessaloniki began to honor him as the patron saint of the city. The feast of Saint Demetrius has been celebrated in Thessaloniki since the 5th century, and soon after it was transferred to Thrace and Macedonia.

In the folk calendar, the celebration of Saint Demetrius is associated with a turning point in the season and the beginning of winter. According to belief, the first snowflakes fall from the saint's white beard. "...

AGNO products: When they will return to the Greek markets