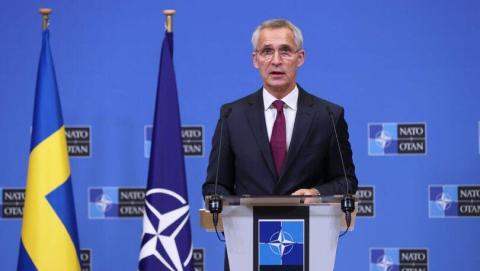 NATO chief Jens Stoltenberg said on Oct. 26 he would go to Türkiye "in the near future" to discuss Finland and Sweden's nearly completed process to join the military alliance.

The trip to meet President Recep Tayyip Erdoğan will be a sensitive one, as Türkiye is, along with Hungary, the last of NATO's 30 countries to ratify the accession protocol that would make Finland and Sweden new members.

The process needs to be unanimous. But Erdoğan in early October warned his country would not ratify the two countries' memberships until "the promises" they made were kept.

The two Nordic nations earlier this year ditched their longstanding policies of non-alignment, asking to join NATO because of Russia's invasion of Ukraine and how it reshuffled Europe's security.

In June, Türkiye, Sweden and Finland struck a deal which included provisions on extraditions of terrorists and sharing of information.
Stoltenberg, speaking at a media conference after welcoming Romania's prime minister to NATO headquarters, hailed the "close contact" Stockholm and Helsinki now had with Ankara "at all levels".

He said: "I will go to... Istanbul to meet with President Erdoğan in the near future myself".

It would follow up on a visit new Swedish Prime Minister Ulf Kristersson is to make in the coming days.

Stoltenberg also said Hungary "has made it clear" that its parliament would vote on ratification of the accession protocols for Finland and Sweden in the next month or so.

"I'm confident that all allies will ratify the accession protocol," he said.

The NATO chief added, in a veiled warning to Russia, that security guarantees extended to Finland and Sweden pending their membership process continued to apply.

The Flu Wave is Rising in Bulgaria! Two Strains are Circulating – H3N2 and H1N1

Tourism - Where did Bulgarians Travel in September