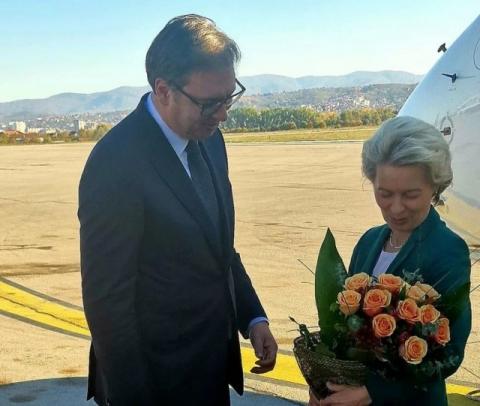 Vui presented the president of the EC with a bouquet of flowers upon greeting her at the airport.
Serbian President and Von der Leyen then went to tour together the works on the construction of the Serbia-Bulgaria gas interconnector in the town of Jelanica.
Von der Leyen will then talk separately with Vui and Serbian Prime Minister Ana Brnabi in Belgrade.At the beginning of the Western Balkans tour on Wednesday, von der Leyen said in Skopje that the EU has prepared a support package for the entire Western Balkans to help the region in facing the energy crisis.
"We will do everything necessary to align with the European visa policy," said Vui, following on from Von der Leyen's speech.
"As for the talks with Pristina, I am very worried. We will do everything we can to preserve peace and stability. We have nowhere else to go," said Vui.
He drew attention to the fact that Ursula had the opportunity to meet the new members of the Government and thanked her for her concern for the people of Serbia. After their address, questions from journalists followed, and the first was related to the future of Serbia in the European Union.
"The enlargement process is based on merit and it is in the hands of the country that wants to join the EU. It is in their hands to make progress in reforms, which is extremely important. You have done a lot so far and we are working together to achieve further progress, but it is important to align with our policy. We count on Serbia as a reliable partner," said Von der Leyen.
"I think that they helped us even more than we expected and thank you for every kind of support. I hope that we will try to convince the EU that we deserved to open another cluster, but I am not sure," said Vui.

The Weather in Bulgaria will be Windy, Temperatures up to 14 Degrees