Vučić to Besson: Thank you for your intellectual independence PHOTO 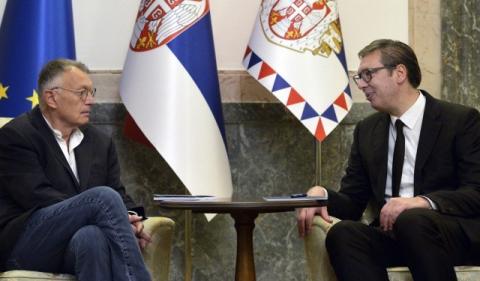 "I thank you for the intellectual independence, sincerity and honesty with which, through your literary works, you brought the history and destiny of the Serbian people and Serbia closer to the French public," the president announced on his Instagram profile, along with photos of the meeting.
Besson is the "biggest star" of this year's Belgrade Book Fair, where he presented his book about Novak Djokovic.
The reputable French publishing house "Louison ditions" published this month the latest book of Patrick Besson entitled: "Djokovic, I refuse" (Djokovic, Le Refuse).
He assessed that Novak's "No" was very difficult, that it shook the world, especially because everyone else agreed to get vaccinated against COVID, while Serbian tennis player resolutely refused.
"Then, from that moment on, I thoroughly began to take an interest in and later research everything that was happening around him, read about him, about others, what they say about the greatest tennis player, what he says about himself, and I realized in the end that it was the only correct decision that Novak could have made: not to get vaccinated," Besson concluded.
The famous French writer, a great friend of Serbia, was very involved in the French and Serbian public, especially in the defense of the Serbian people in the period from 1995 to 2000, which began with the book published in France - "Cry against Serbia's slanderers" (1995).
Besson wrote more than 80 books as a very prolific writer, the author of notable novels and books of stories such as "The Gift", "The Sloth", "The Art of Seduction", "The Villa of Don Quixote", "State of Mind", "The Rich Woman", "Belgrade City ", "Les Braban", "Srdjan", "Milos and Milena and Julius and Isaac", "La Titanic", "Pushkin's death"...

Macron prepares "Made in Europe" Strategy against US Policies

145 Years since the Liberation of Sofia