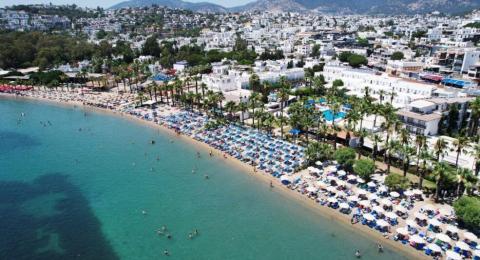 Türkiye has once again revised its tourist arrival and tourism revenue targets for 2022 upward to 50 million and $44 billion, respectively, Culture and Tourism Minister Mehmet Nuri Ersoy has announced.

Tourism activity is strong in October, Ersoy said at an event in Istanbul, adding that this year's figures will be close to that of 2019.

At the start of the year, the country set its targets for 2022 at 42 million tourists and $34 billion in revenues, but amid the strong rebound in tourism activity, Ersoy in July announced that those targets were revised upwards to 47 million visitors and $37 billion of revenues.

Depending on the December data, the revenue target of $50 billion for 2023 could also be revised, the minister said on Oct. 27. Türkiye is performing better than its competitors in the Mediterranean region, Ersoy said. "Tourist arrivals in Spain and Italy declined by 18 percent and 29 percent in the first seven months of 2022 compared with the same period of 2019, while the decline was 12 percent for Greece and only 7 percent for Türkiye," he added.

Tourism revenues in those countries also declined over the same period, but Türkiye saw a 12 percent increase compared with January-July 2019, according to the minister.

Türkiye engaged in extensive promoting activities in 2022, Ersoy said, referring to the work of the Türkiye Tourism Promotion and Development Agency (TGA). "Promotion campaigns were held in more than 200 countries. Every destination Turkish Airlines flies to is a target [market]. We should be able to bring tourists from those destinations."

Ersoy noted that due to the war, there have been significant...

EU to try again for coordination on China COVID-19 policies