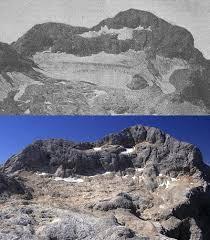 The latest measurements of the glaciers below the Triglav and Skuta peaks have shown that the only two remaining glaciers in Slovenia have shrunk and thinned significantly this year due to the unfavourable snow and temperature conditions, and that they are under threat of disappearing.

The worrying state has been established through research that will be completed in the spring of 2023 as part of the Mission: Triglav Glacier to Beijing environmental project.

The latest round of measurements and sampling of the glaciers below Mt Triglav (2,864 m), Slovenia’s highest peak, and Mt Skuta (2,532 m), the third highest peak in the Kamnik-Savinja Alps, was concluded at the end of summer.

In addition to the surface area of the glaciers, their thickness and volume was also measured this year by means of a ground-penetrating radar. The volume of the Skuta glacier was actually measured for the first time this year.

Miha Pavšek of the Anton Melik Institute of Geography, the head of research, noted that the remains of what used to be true glaciers had further shrunk and thinned considerably this year, largely due to the unfavourable snow and temperature conditions.

This year, the highest total height of the snow cover was very modest (245 cm), almost one and a half metre lower than the long-term average. There are indications that the melting season from May to October will be the warmest on record.

“They continue to get smaller and thinner, so if such a situation continues, they may be under threat of disappearing, which means that there will be no precious water that supplies the nearby mountain huts and valley springs, either,” he added.

This year’s measurements showed that the Triglav glacier measures 0.7 hectares, or slightly less than the size of a football field, while the glacier under Skuta is almost twice as large, measuring 1.2 hectares.

Despite situated 400 meters lower than the Triglav glacier, the Skuta glacier has been in better condition than its western counterpart in recent years, as it twice as longer in the shade – from the beginning of September to the beginning of April.

Samples of the snow cover, old snow, ice and water flowing from under the glaciers were submitted at the beginning of autumn for further processing.

Special analyses, research and dating will be carried out to provide better insight into the weather and climate history of the high-altitude parts of Slovenia, which are among the areas most vulnerable to climate change, Pavšek noted.