Vučić: The barricades will be removed, but... 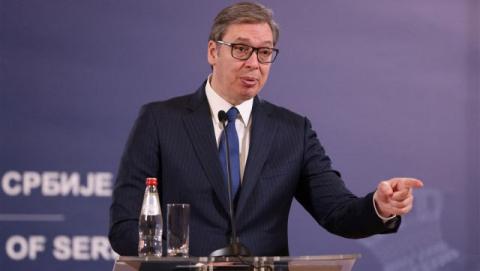 "We had a conversation that was anything but easy," he said.
"We gave people the papers, and there is nothing bad about it... We had difficult conversations, but we were very honest with each other. As I understood it, this was the conclusion of the Headquarters from the barricades. People told me that they did not want to go against their country," said Vui.
"I begged them, I left them alone to make a decision and then they handed me what they were putting together at the barricades," he added.
"Serbs do not believe in institutions, we only believe in the state of Serbia and that is why we demand a clear word from you personally that we have support for what follows. If the terror continues, we will close the north of Kosovo forever to the institutions of Pristina, we ask for a guarantee that you will never recognize independence of Kosovo," he said.
"If they start arresting Serbs because of the barricades, whatever you do after that, I stand behind you," he said.
"Barricades will be removed, but mistrust has not been removed," said Vui.
Earlier in the evening, Vui spoke with Serbs from Kosovo and Metohija who expressed the problems they face every day due to the terror of Pristina.