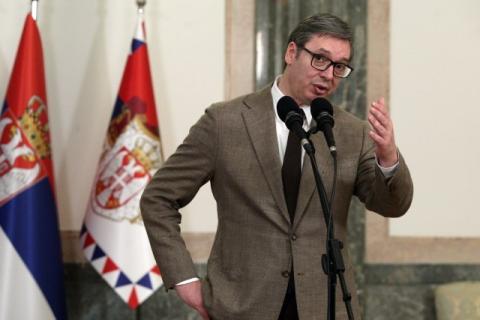 "I met a genuinely wonderful family of proud Serbs. They raised a boy who loves his country," said Vui.
Vui said that Nedeljkovi is known for his humanitarian work and the help he provides to his people.
"This case is a case that shows who we are dealing with," he said.
"They only have a video where he is seen wearing T-shirt with the slogan "No surrender"... It is fortunate that the child was released. He will not be treated as a convicted person. As far as RS laws are concerned, Nikola Nedeljkovic is as clean as a tear drop," he said.

"They didn't even manage to break a finger on our left hand, let alone our spine"

"For me, it's important that they fulfill the things from the guarantees they gave. It's important for me that they understand that they pretended to be naive, and that they were watching someone raise four bases. And the question arises why you raise them. You don't do that in order to build trust but in order to threaten people," he said.
"That's why I'm asking them to put the batterers away," said Vui.
"I called the European representatives this morning and asked them to take into account that situation is much more dangerous and difficult than they think. Tonight on TV Prva I will talk about why the Pristina authorities failed and why they had to withdraw," said Vui.
"I expect that in the first half of January, powerful people from around the world will come to give me a lecture," he said.
"Then the torture will continue with Kurti. We talk, and I know he won't do anything, we talk, and I know he won't reconcile," he added.
"It is important for them that the noose is seen around my neck, and they are not interested in Serbia, they really don't care about Serbia," he said.
"I...