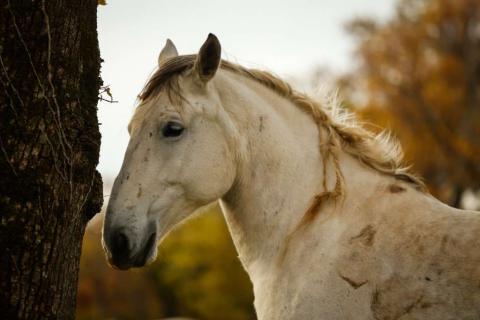 The documentary Neverjetna Zgodba Lepotcev Iz Lipice (The Incredible Story of Lipica Beauties), pays homage to the loyalty and dedication of the stablemen who stood by the horses through thick and thin.

After Italy surrendered in 1943, the German troops took all 179 Lipizzan horses from the Lipica stud farm and relocated them to Hostoun, in modern-day Czech Republic, where a breeding centre was set up. Their goal was to own the best specimens from Europe’s finest stud farms.

As the war was drawing to a close and Hostoun came under Soviet rule, US troops, led by Colonel George Patton, who was an expert equestrian himself, launched a rescue mission, dubbed Cowboy, to rescue 1,000 horses from the centre, including the Lipizzans.

In May 1945, the horses were evacuated aboard a long freight train through the Bohemian Forest to US occupied Bavaria. Over a year and a half later, in December 1947, only 11 Lipizzans were returned to the Lipica stud farm.

Produced by the local Kolut film association, the documentary was made in cooperation with the local community of Hostoun in the Czech Republic, the Lipica stud farm and the Pivka Military History Park. It was financially supported by the Postojna municipality, insurer Zavarovalnica Triglav and the US Embassy in Ljubljana.

Written by musician Drago Mislej Mef and directed by Dušan Milavec, the documentary premiered in mid-December at the Postojna cultural centre. The next screening is scheduled on 12 January at the Pivka cultural centre.

Moreover, an exhibition dubbed the Lipizzan Horses – Living Legends will be on display at Pivka’s Park of Military History, accompanied by a discussion with the filmmakers and project partners.

This is not the first time the rescue mission inspired the film industry; in 1963 Walt Disney released an adventure war film The Miracle of the White Stallions.

“It was a very fortunate set of circumstances, a miracle if you will, that led to the Lipizzans’ rescue. The right people were in the right place, who loved the horses and risked their lives to save them,” said Janko Boštjančič, the director of the Military History Park.