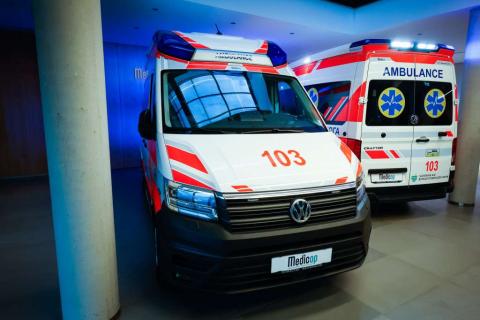 Slovenia has been a major donor to Ukraine since the start of Russia’s invasion and has recently donated ambulances and power equipment as part of a deliberate shift from military to non-military aid.

Two ambulances worth €210,000 were sent off to Ukraine on 30 December, in a move that Foreign Minister Tanja Fajon described as “an important message to Ukraine that it is not alone, that we wish to help.” She hopes that the vehicles will soon serve in peacetime.

The vehicles are made by the Slovenian company Medicop. In a few months’ time a third vehicle equipped with an incubator for prematurely born babies will be delivered.

The donation came just days after nine Slovenian power companies joined forces and donated several truckloads of equipment to help Ukraine repair and rebuild its electricity infrastructure, which is often the target of Russian missile strikes.

The €330,000-plus shipment contained transformers, generators, burners, electric motors and other equipment, a package that Ukrainian Ambassador Andriy Taran said would bring “light, heating and hope” to at least 10,000 people.

Infrastructure Minister Bojan Kumer promised the government would continue to look for ways to assist Ukraine next year.

The Slovenian state has so far provided aid worth at least EUR 4.3 million to Ukraine, plus EUR 1 million for President Volodymyr Zelensky’s grain export initiative. Another EUR 5.5 million in aid has been provided by humanitarian organisations, according to Foreign Ministry data.

Slovenia has also been a major donor of military aid, most notably of 28 tanks of the M55S type produced several decades ago but substantially upgraded. After the shipment of tanks in September the government said Slovenia no longer had military gear it could donate and would instead shift its focus to humanitarian assistance.