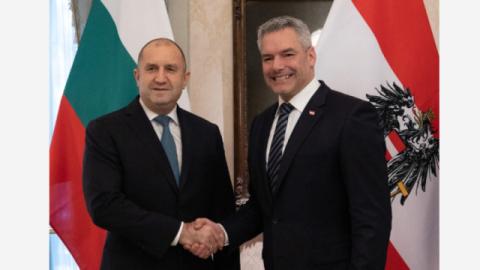 "Protecting the external borders of the European Union is a common commitment of all member states and is key to tackling illegal migration." This was the general position of President Rumen Radev and the Federal Chancellor of the Republic of Austria Karl Nehammer, who talked today in Vienna, reports the press service of the Bulgarian presidency.

At the invitation of Karl Nehammer, the Bulgarian president is the only state leader invited to this year's edition of the traditional New Year's concert of the Vienna Philharmonic in the Golden Hall of the Musikverein.

The two leaders highlighted during the warm-up the good cooperation between Bulgaria and Austria and discussed the European migration and asylum policy before the European Council on February 9 and 10.

Rumen Radev stressed that the protection of the external European borders requires even closer cooperation between European countries, as well as targeted technical and financial support from the EU. The President also reminded that Bulgaria has made substantial investments in the improvement of the protection of its borders and this has been confirmed by all the missions of the European Union.

For his part, the Federal Chancellor of Austria - Karl Nehammer expressed his appreciation for the invitation accepted by the Bulgarian head of state to visit Vienna to continue the bilateral dialogue and highlighted Austria's desire to strengthen cooperation with our country in the protection of the EU's external borders to deal with illegal migration. In his words, Europe cannot afford tens of thousands of unregistered migrants to cross the territory of EU member states. The high number of illegal migrants also represents a serious problem for the security of the entire European...