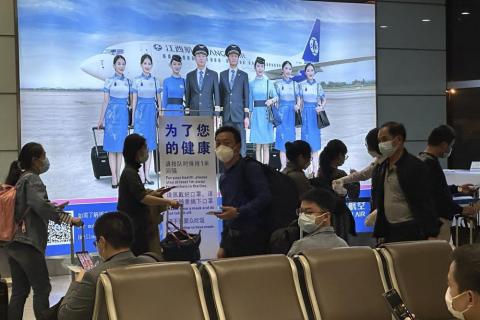 Travellers from China now face restrictions when entering more than a dozen countries as concern grows over its surge in Covid-19 cases, with Australia the latest to demand a negative test before arrival.

As Covid overwhelms Chinese hospitals and crematoriums, officials have insisted that the wave is "under control" despite acknowledging that the true scale of infections is "impossible" to track.

Australia's health minister on Sunday cited Beijing's "lack of comprehensive information" about Covid cases as the reasoning behind the travel requirement, which will take effect on January 5. The move will "safeguard Australia from the risk of potential new emerging variants," he said.

In recent days, Canada, the United States, the United Kingdom, France, Italy, Spain, Japan, South Korea and Taiwan have also imposed either a negative Covid test requirement or testing upon arrival for travellers from China.

Meanwhile, Morocco moved to ban all arrivals from China on Saturday, "to avoid a new wave of contaminations in Morocco and all its consequences".The flurry of global travel restrictions began as countries anticipated a surge in Chinese visitors after Beijing announced mandatory quarantine for inbound passengers would end on January 8.

The World Health Organization has called the precautionary measures "understandable" in light of the lack of outbreak information provided by Beijing.