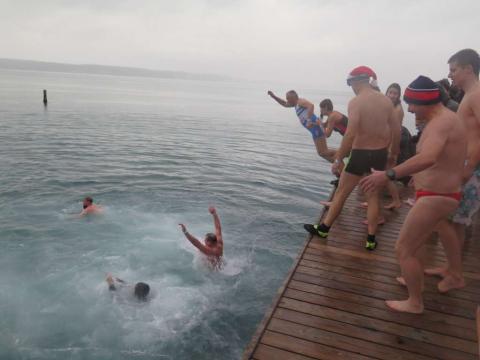 Slovenians saw in the arrival of 2023 in the warmest weather on record with temperatures in some parts of the country exceeding 15 degrees Celsius on New Year’s morning. The night was exceptionally balmy, at well over 10 degrees.

“It’s definitely the warmest start to the New Year since measurements began,” Blaž Šter, a duty meteorologist at the Slovenian Environment Agency, told the STA on 1 January.

The highest temperature at 7am was recorded at Dobliče near Črnomelj in the south, where the mercury rose to 15.2 Celsius. Kočevje, just a bit further to the north-west, and Ptuj in the north-east of the country had almost 14 degrees and Celje had just over 13.

The capital Ljubljana recorded 12.1 Celsius in the morning, but it was 12 degrees exactly at the stroke of midnight as thousands of revellers ushered in the New Year at the biggest outdoor party in the country, many of them coming from abroad.

Although Slovenia has become used to snowless Christmas and New Year’s holidays and increasingly high temperatures in recent years, the mercury on New Year’s Eve has never before topped 10 degrees.

Most of the country has not had snow for New Year’s Eve since 2015 nor a white Christmas for 15 years, data recently released by the Environment Agency show.

What Šter notes as particularly surprising this time around is the “exceptionally long spell of above-average temperatures at this time of year”. And the balmy weather will continue over the next few days.

Temperatures are expected to drop next weekend as a cold front makes its way into the country. However, Šter says it will not be very harsh and he does not expect this winter in Slovenia will be very cold.

Still, the meteorologist does not think temperatures will climb over the record 21.4 Celsius measured in Slovenske Konjice in mid-north-east on 29 January 2002.

The balmy weather is a boon to those taking part in the New Year’s dip into the sea in Portorož, which is back for the 17th time after a two-year break due to Covid-19. The sea currently has about 13 degrees Celsius.