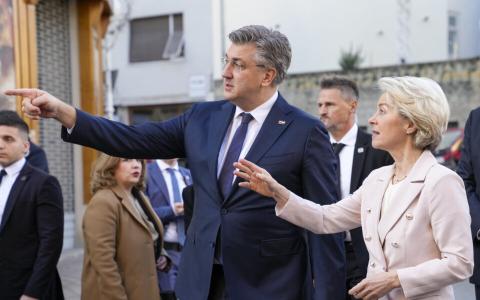 The chief of the European Union visited Croatia on Sunday to celebrate the "immense achievements" of the newest EU member nation, which switched to using the euro and joined the world's largest passport-free travel area on New Year's Day.

European Commission President Ursula von der Leyen met with leaders of Croatia and Slovenia at the Bregana border crossing between the two Balkan countries, which became obsolete in the first minutes of 2023 as the Schengen Area was expanded to include Croatia.

At midnight on Saturday, Croatia also relegated its national currency, the kuna, to history and changed to the euro, the common currency used by 347 million Europeans,

"There is no place in Europe where there it is more true today that it is the season of new beginnings and new chapters than here at the border between Croatia and Slovenia," von der Leyen said. "Indeed,...