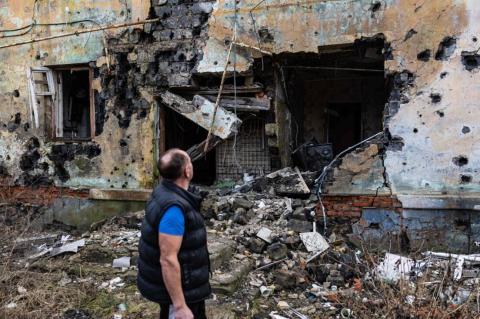 Russia on Monday said more than 60 soldiers were killed in a Ukrainian strike on Russian-controlled territory in a New Year assault, the biggest loss of life reported by Moscow so far.

Kiev took responsibility for the strike, which it said took place in the occupied city of Makiivka in eastern Ukraine on New Year's Eve.

In a rare announcement that followed criticism by Russian military correspondents, the defence ministry in Moscow said 63 Russian servicemen were killed "as a result of a strike by four missiles" in Makiivka.

It was the biggest loss of life reported by the Russian defence ministry so far in a conflict that has dragged on since President Vladimir Putin ordered Russian troops to invade on February 24 last year.

The Russian ministry said US-supplied Himars rocket systems had been used and the target was a temporary deployment point.

Late on Monday, the general staff of Ukraine's armed forces said in a statement that its forces were behind the strikes on Makiivka."

Up to 10 units of enemy military equipment of various types were destroyed and damaged," the general staff said.

Earlier in the day, the strategic communications department of Ukraine's armed forces said nearly 400 Russian troops were killed in Makiivka.

The general staff, which usually communicates on such incidents, did not confirm the figure and said the human "losses" were still being established.

Russian war correspondents, who have gained influence in recent months, said hundreds could have been killed in the strike on a vocational school in Makiivka and accused Russia's top commanders of not learning from past mistakes.

No trace of Gülistan Doku found for 3 years

In memoir, Prince Harry says William attacked him during row

US House adjourns with no new speaker for third day