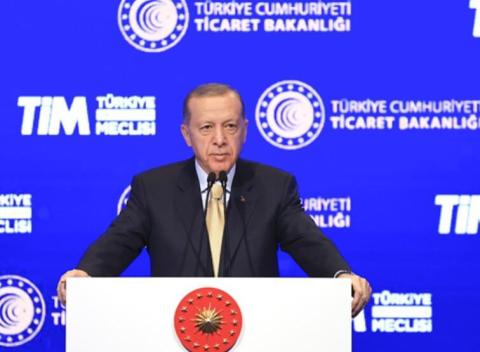 Türkiye has reached its highest export figures ever in 2022 with $254.2 billion despite the global challenges, President Recep Tayyip Erdoğan said on Jan. 2.

"The COVID-19 pandemic, disruptions in global supply chains, the Russia-Ukraine war, and troubles such as raw material and energy crises, which all have deeply affected the entire world, couldn't slow down our economy and exports. On the contrary, we have reached the highest growth rates and export figures in our history by turning these crises into an opportunity," Erdoğan said at an event held to unveil the annual foreign trade figures for 2022.

Türkiye had $254.2 billion worth of exports in 2022, up 12.9 percent year-on-year, he said and added, "This is a record-high figure in our Republican history. I hope this export figure may be auspicious for our country, nation and economy."

The country achieved the highest level of the past half-century with an 11.4 percent growth rate in 2021 alone, he stated.

Stressing that the exports alone made a 5.3 percentage point contribution to this growth rate, Erdoğan said Türkiye's share from global exports exceeded 1 percent for the first time.

"We maintained our stable growth last year as well. At a time when the world, including developed countries, was struggling in deep agony. We grew by 6.2 percent in the first three quarters of 2022," he said.

In the first 10 months of the year, the government increased its service exports to 76.4 billion dollars, he said. "We aim to reach over $85 billion by the end of the year and to contribute $50 billion to the reduction of the current account deficit."

The number of countries and regions to which Türkiye exports with its national currency has reached 197, the president noted.<...

The Bulgarian Deputies will Hear Out Christo Grozev Today