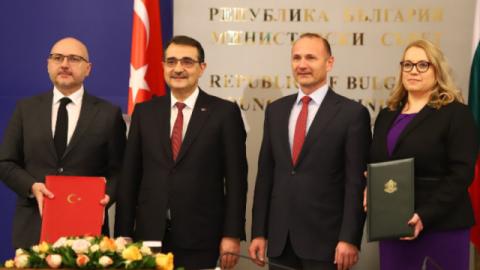 Bulgargaz will have access to Turkey's terminals and gas transmission network. Up to 1.5 billion cubic meters of natural gas can be transferred annually to Bulgaria from Turkey. This became clear after Bulgargaz and the Turkish gas transmission company Botas signed a 13-year cooperation agreement.

The document was signed by the managements of "Bulgargaz" and "Botas" in the presence of the Acting Minister of Energy Rosen Hristov and the Turkish Minister of Energy and Natural Resources Fatih Dönmez. The agreement will be for a period of 13 years.

According to the Minister of Energy Rosen Hristov, the agreement solves the problem of lack of sufficient infrastructure, which our country faced last year:

Hristov announced that in this way Bulgaria has the opportunity to purchase natural gas from "all world producers" and unload it in Turkey, which he hopes will solve the problem of the lack of sufficient infrastructure for unloading liquefied natural gas.

According to Hristov, "the moment is historic". The agreement was agreed on Christmas, the energy minister stressed.

"As you know, in 2022 we had difficulties with gas supplies, and now, together with our colleagues from Turkey, we are solving this problem. This contract was agreed on December 24 and 25, 2022, and today, with its signing, a big new beginning", Hristov also stated.

For his part, Turkish Minister of Energy and Natural Resources Fatih Dönmez stated:

"My wish is that 2023 will be fruitful for our bilateral relations, especially in energy. Last month, our presidents met in Istanbul, and we met with my colleague Hristov to discuss certain priorities, with which from today we are starting to realize. The term of this agreement is...