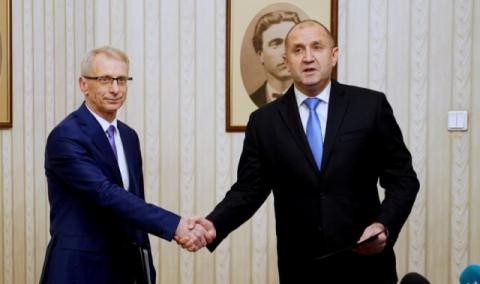 President Rumen Radev handed the second mandate to form a government to the second largest parliamentary group in the 48th National Assembly - that of "We Continue the Change".

"We are nominating Acad. Nikolay Denkov as a candidate for Prime Minister," said the chairman of the parliamentary group of "We Continue the Change" (WCC), Andrey Gyurov.

"You receive this exploratory mandate on the first working day of the new year, when we look with hope and expectation for more reason, dialogue and understanding, for unity around the priorities important to our country. I trust that you will use the time within the coming week to seek the necessary support from the other political forces, so that within up to 7 days you will return with a fulfilled mandate and draft composition of the Council of Ministers," said Rumen Radev.

Acad. Nikolay Denkov added that "We Continue the Change" accept this mandate with the clear awareness that the task is extremely difficult. "Many people even say that it is impossible. However, we are convinced that we must do everything necessary to form a government," said Nikolay Denkov.

According to him, many problems have accumulated and reforms have been delayed.

"We need a government that unites people and solves their problems. That is why we changed the approach to prepare the realization of this mandate. We used the holidays to define 4 national goals that we believe unite people and political formations." Nikolay Denkov added.

Nikolay Denkov explained that WCC made a list of activities that, if implemented in 2023, would bring Bulgaria closer to the fulfillment of these national goals.

"3 political formations took part in the...