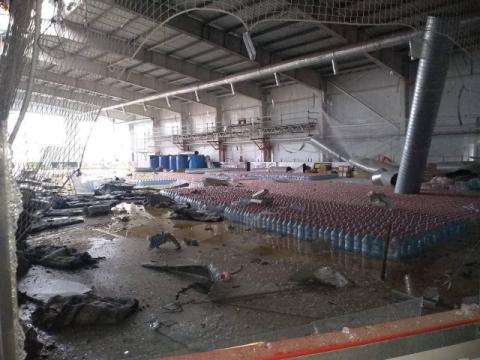 Aftermath of the Russian strike on Druzhkivka @nexta_tv, Twitter

Ukraine: 500 drones have been shot down since September 2022 so far

The spokesman for the Air Force Command of the Armed Forces of Ukraine, Yuriy Ignat, told a Ukrainian television channel on Tuesday that the country has shot down about 500 Iranian-made drones since September 2022. Speaking about the massive attacks by Russian drones carried out in the last two days, Yuriy Ignat noted that the Ukrainian military managed to shoot down all 84 drones.

In addition, he stated that if the enemy continues to bomb "at such a pace as during these two nights, then according to the information that has already been announced by our special services about a new batch of 250 drones, at least half of them have already been used".

However, the Ukrainian official cautioned that these numbers should not be misleading, as Moscow could still receive new supplies of drones from Tehran. He commented that Russia is currently using cheap Iranian drones in an attempt to wear out Ukraine's air defense systems.

In mid-December, the Russian military and Wagner Private Army forces likely increased the frequency of their infantry attacks around the town of Bakhmut in Donetsk Oblast, Ukraine. However, many of these operations were poorly supported, British intelligence wrote in its summary of the war today.

Over the past ten days, Ukraine has committed significant reinforcements to protect the sector, and the frequency of Russian attacks is likely to have decreased since the peak in mid-December. Both countries suffered heavy losses, the...

No trace of Gülistan Doku found for 3 years

Bulgaria’s PM: A 10% Reduction in Carbon Emissions is Not Acceptable, We will Ask for Postponement

Bulgaria’s Interior Minister: We are Preparing a Specialized Operation against Illegal Migration

WHO: The New Subvariant of COVID-19 is the Most Contagious so far

Bulgaria will Not Introduce COVID Measures for arrivals from China