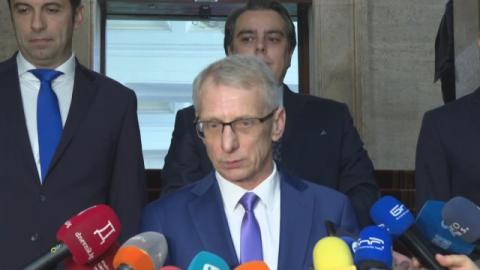 "The conversation was extremely informative, the foundation was laid with this draft solution. It poses the questions of what we should focus on as national goals that can unite us and as tasks that we must complete together, seeking a majority in the National Assembly. This is the most difficult part of the task, because at the moment we have 109 MPs. The conversation with the president was focused on these common tasks," said Acad. Nikolay Denkov after President Rumen Radev handed over the second mandate to form a government to "We Continue the Change".

According to Nikolay Denkov, the main priorities are four - development of an innovative and high-tech economy, ensuring national security, energy security in connection with the war in Ukraine and reducing inequalities, access to quality education and healthcare.

"At 2:00 p.m. in the National Assembly, we have invited all political forces represented in the parliament to come to a meeting to discuss the text of this declaration. So far, we have discussed with 'Democratic Bulgaria', BSP and 'Bulgarian Rise'. The goals that we set, are realistic and unifying. With the exception of 'Vazrazhdane', who have completely different ideas about how Bulgaria should develop, I expect that GERB and DPS almost without exception could support each of these goals," added the academician.

He explained that if the declaration is supported, it will remain as a document that unites all political forces.

"If there is such a positive decision, then we will look for a composition of the Council of Ministers. If there is no support, we cannot propose a cabinet. We are not discussing a third term at all, we are interested in how we can implement the second. Let's see if...